The Definition of Mediation

Do you have questions about mediation in your state? Check out this video and call our office for a free consultation. 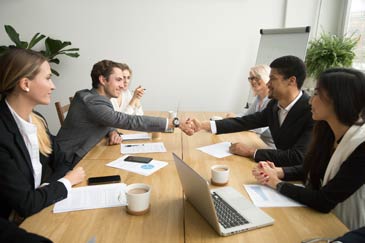 At Callagy Law, we are frequently asked what mediation is. This word can mean a lot of different things. Mediation is something that’s done by agreement. Sometimes, when you’re involved in the litigation, a court will order you to a mandatory mediation. Generally, when you think mediation, you should think non-binding, informal, and inexpensive. What is the non-binding piece of mediation mean?

You’re going to go and meet with a referee, a third-party who’s going to try to bridge the gap in your dispute, and they’re going to try to answer whatever questions you may have, call you or the other side on things that they see as problematic, and render the same kind of an opinion that a court of law would or an arbitrator would. They’re there to try to get to a resolution. Whatever result that they ultimately reach and whatever they tell you should be the case is usually non-binding, meaning you can walk out of the room and the entire process is meaningless, except for the fact that it may give you a good idea of what the ultimate resolution is going to be.

What does informal actually mean? This is not like people sitting around on a couch, though you could. Usually the process is much less formal than our justice courts or courts of law, meaning people will talk about things like pieces of evidence, arguments that they want to make, documents or materials – whether they’re objectionable for a host of evidentiary reasons – that may not get into the record. A mediator will still hear all of these things and process this information to try to come to a reasonable resolution. They may say that piece of information is never going to get in, so they’re not going to have that impact any of their decision making, but generally the process is much more informal. Generally, there’s a lot more communication between the parties, as opposed to their attorneys, and it’s usually a back-and-forth to try to get to resolution, ultimately.

You’ve got the non-binding piece of this, you have the informal nature of it, and then you have an inexpensive piece. Litigations can be extremely expensive. They can range from $25,000 to $2 million, even $10 million, depending on the type of dispute that’s at issue. If you have a dispute that’s worth $100 million, it’s not unusual for companies to spend millions of dollars in litigation.

A mediation process is generally a one or two-day process, maximum. You’ll have your attorney prepare a statement, usually referred to as “blind”, meaning it’s confidential and the other side won’t see it, and you’ll submit it to the mediator. They’ll read it, look at some documents and materials that you’ve provided to them, and then you’ll have a meeting. You’ll spend a couple of hours with the mediator, maybe an hour here, an hour there, as they’re jumping back and forth between the parties trying to get to resolution. That can usually produce a resolution because you have parties who are in a room together, feeling some degree of mental exhaustion, and they just want this case to be over. As a result, mediation can be very inexpensive compared to going through an entire litigation. This one or two-day process could probably cost you $1,000, $2,000, maybe $3,000, but it avoids $50,000, $100,000, $200,000 litigation.

When you’re thinking mediation, think non-binding, think informal, think inexpensive. More importantly, there’s a specific rule that says that anything that’s discussed at mediation cannot come in as a matter of law into any litigations, so you have freedom to be truthful, to tell your side of the story, to explain things and not be worried that your words are going to come revisit you. Mediation is a great process to try to get dispute resolution using an outside referee or third-party that’s non-binding, informal, inexpensive and allows you to share the truth.

If you have any other questions, we here at Callagy Law are ready to take your call. Give us a call whenever you like.

Are you a business owner in New Jersey and have questions about alternatives to business litigation? Contact our experienced New Jersey business dispute attorneys at Callagy Law today for a free consultation and case evaluation.