The Definition of Business Arbitration

Watch this video to learn about the definition of business arbitration in New Jersey. Then call Callagy Law for a free legal consultation.

What is business dispute arbitration? 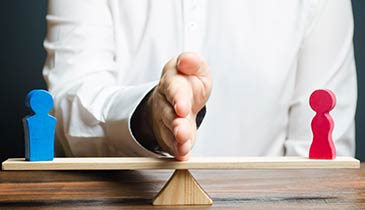 What is business dispute arbitration? Arbitration is a process that is more informal than your run-of-the-mill litigation. When you think litigation, think, “I filed a complaint.” Think about a long discovery process with depositions and written questions, and documents being produced, and then ultimately a trial, whether it’s before a judge or a jury. The business dispute arbitration really is a more informal process. Usually it’s just one person – it could be three – that’s going to be making the decision, ultimately. They may allow certain discovery, meaning depositions and written questions and documents to be produced, but generally the process moves much faster. It is much more curtailed process, meaning it’s not as long and there aren’t as many things happening as there would be in a litigation. At the end of that arbitration, that arbitrator is going to make an ultimate decision that almost definitely, unless you agree otherwise, is going to be binding. What does that actually mean?

That determination, once it’s done, is turned into something called an award. Once you have an award in hand, you can go into court and get that award confirmed and turned into a judgment. Once it’s confirmed and turned into a judgment, it has all the strength as if a judge or a jury rendered that opinion. An arbitration is a very final process. In that finality, you are essentially waiving some your rights to a longer process, to more discovery, but you’re getting rid of that in exchange for relatively less expensive, faster, and more final – if that’s something that you really want. In addition, it’s relatively confidential. Some of the materials can get out, if there are subpoenas and things of that nature, but because it’s not filed in public, it’s usually more confidential.

When you think business dispute arbitration, you’re thinking more informal, less expensive, and more confidential, but there’s definitely more finality to it. There are no appeals. Even if the arbitrator sort of follows the law in rendering their opinion, it’s really challenging to appeal the finality of an award. Once you have an award, that award turns into a judgment and has all of the force of any decision that a judge or jury would decide.

If you have any further questions, reach out to us here at Callagy Law. We’re here to answer this and any other question you may have.

Are you a business owner in New Jersey and have questions about the definition of business arbitration? Contact our experienced New Jersey business dispute attorneys at Callagy Law today for a free consultation and case evaluation.