The Bucket 4 “Carve Out”

After searching various sources, we have found many people have questions when it comes to Medical Revenue Recovery, PIP, Workers Compensation, and Commercial Insurance. The following article was written by Callagy Law’s Legal Team, and will focus on many common questions and concerns surrounding new developments, legal matters, and other procedures within the field of healthcare law and medical revenue recovery. Our mission is to answer any questions and give knowledge to many different aspects of these matters

This blog is a little bit “inside baseball,” in that it’s a hyper technical explanation look at a concept in the world of bundling.  If you’re a PIP practitioner, however, or deal with ASCs and Hospitals, this is an important concept that could lead to a much larger amount of recovery/reimbursement for ASCs or Hospitals

When DOBI updated the PIP regulations (effective 1/4/13) the update included a new section on the “bundling” of outpatient surgical services.  Specifically, N.J.A.C. 11:3-29.5(a)(1-8) and N.J.A.C. 11:3-29.5(b) (which incorporates (a)(1-8)) inform providers and carriers which services are considered “bundled” and are not separately reimbursable.

The code, in relevant part, reads as follows:

D1.pdf) are integral to surgical procedures and are not permitted to be  reimbursed separately in a HOSF;

(a)(1-8), which I’ll colloquially refer to as the “8 buckets,” essentially states that each bucket is included in the main surgical procedure that was performed in the ASC or Hospital on that particular date of service, and that the type of service described by that bucket is not separately reimbursable, since DOBI has already included reimbursement for such services in the price of the ain surgical code on the appropriate fee schedule.

Appendix, Exhibit 1 indicates those CPT codes that, according to Medicare … are considered ancillary services that are integral to surgical procedures and are not permitted to be reimbursed separately in an ASC.

Callagy Law’s PIP attorneys have been successful in arguing that bucket 4 actually is actually a “carve out,” and should be read and interpreted differently than the other 7 buckets.  Our attorneys argue that bucket 4 requires a carrier to not simply state that all diagnostic and therapeutic items and services are automatically included in the main surgical procedure; rather, the carrier must first identify the diagnostic and therapeutic items and services and then proceed to the appropriate fee schedule (Exhibit 1 for ASCs, and Exhibit 7 for Hospitals) to determine whether those services are, in fact, bundled.

There is an entire column in Exhibit 7 (The Hospital Outpatient Surgical Facility Fee Schedule – “HOSF”), for example, titled “Packaged Item; No Separate Payment.”  Our argument is that DOBI is directing providers and carriers to examine Exhibit 7 to see whether the particular diagnostic/therapeutic services being provided in a particular case are marked as bundled.  (see screenshot of Exhibit 7 below) 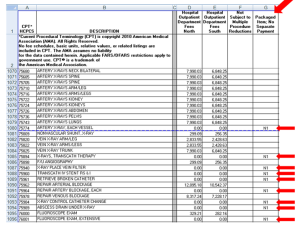 These diagnostic/therapeutic codes often add up to hundreds or thousands of dollars in a particular outpatient surgery, and so mastery of this concept can mean a great deal of additional recoverable money for a particular provider.  This position has been successful with several arbitrators, and the wave of momentum for this argument only seems to be growing stronger.

We hope you have found this information helpful and interesting. Please reach out to us here with any questions or comments regarding healthcare legal matters, or if you are a medical provider that has questions regarding Medical Revenue Recovery, PIP, Workers Compensation, and Commercial Insurance.. Feel free to search us on Facebook, Twitter or LinkedIn! Additionally you can subscribe to our daily videos on YouTube.