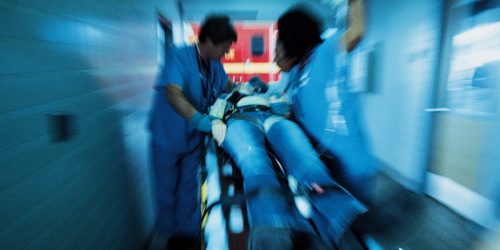 A patient is injured in the workplace when he falls at a construction work site. There appear to be some head, shoulder and knee injuries, as well as a few cuts and bruises. During the New Jersey hospital ER encounter, imaging studies and blood work are conducted. After several hours, the patient is released, but not until after extensive testing, analysis and examination.

Why Would a Hospital Have Contracted for Such a Rate?

The hospital might respond by saying, “Well, we get in exchange very good rates for outpatient and inpatient surgeries from those carriers through the network.” Really! There is no state-imposed fee schedule that applies to treatment of WC patients. WC carriers are obligated by law to pay the hospital’s usual and customary rate or UCR.

The bottom line is that there is no benefit to committing to WC case rates or any other contractual reimbursement for Workers Compensation emergency room services. I would add, however, one additional note to that broad conclusion. If the hospital could secure an agreement for 80% or 90% of billed charges in such an agreement, then I would suggest that the hospital sign on. Those payment terms, unfortunately, are not the terms commonly agreed to by the hospitals.

The answer to why hospitals would accept such abysmal reimbursements in an ER WC context likely lies in the hospital’s lack of knowledge about the WC litigation process. The first instinct of many hospitals seems to be to write off claims, to “clean up” their AR rather than litigate. Indeed, many hospital personnel regard the arbitration/litigation process as slow and protracted. However, for the great majority of claims this is simply untrue.

Well over 50% of claims settle relatively quickly within months of referral to a law firm like Callagy Law. Regarding those claims that do not settle, it makes little sense to simply write off money that will be forthcoming, before it makes sense to do so. Removing claims from a hospital’s AR simply to improve the appearance of the hospital’s financial picture, while abandoning the pursuit of money that will likely be forthcoming, is hardly sound financial practice, and unfortunately it is way too common.

In light of the above, it is difficult to conceive of a reason why a hospital in any way would contract with a WC carrier for ER services, unless, as mentioned above, the contracted rate was a very high percentage of billed charges. If a hospital is interested in contracting with a WC carrier in order to generate construction accident patient referrals from these carriers, the hospital should limit the application of the rates to the non-ER context. The hospital should resist the carrier drive to have WC ER services fall under the contractual reimbursement provisions. The hospital will likely be giving up too much if the hospital agrees to do so.