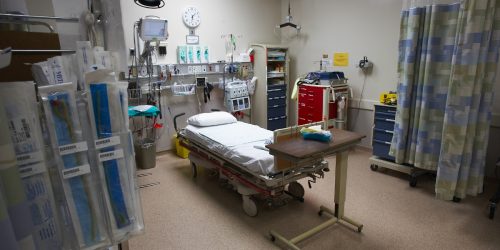 A patient is taken to a New Jersey hospital ER after a very serious automobile accident. The patient suffered some head, shoulder, torso and knee trauma, though the severity of the injuries is unclear. The patient has numerous lacerations on their face, head and chin. During the ER encounter, X-Rays and imaging studies take place, blood is extracted and tested, a plastic surgeon is called in to close up the lacerations. The orthopedist on call examines the patient and consults with the patient after discussing the results of the X-Rays with the radiologist. After several hours, the patient is released, and by all appearances will be okay.

Let’s call this a level 5 ER encounter, and the bill from the hospital to the PIP carrier might look something like this:

Why Would a Hospital Have Contracted for Such a Rate?

Hospitals most often defensively respond to that question with something like, “Well, we get in exchange very good rates for outpatient and inpatient surgeries from those carriers through the network.” Really! There is a New Jersey PIP fee schedule that applies to outpatient surgeries, which carriers are required by law to pay, and inpatient surgeries are not governed by any fee schedule, so carriers are obligated to pay either billed charges or UCR. There is no benefit to committing to PIP case rates or any other contractual reimbursement for ER services in PIP.

The answer to why hospitals would accept such abysmal reimbursements in an ER PIP context might lie in the unfortunate history of hospital reimbursement in PIP.

For several years, automobile insurance carriers applied the PIP (No Fault) Physician Fee Schedule rates to hospital facility charges. As you can imagine, this resulted in dramatic underpayments to hospitals in New Jersey. It is quite possible that hospitals grew accustomed to terrible reimbursement rates from PIP carriers for ER treatment, a circumstance about which, I am sure, PIP carriers were overjoyed. Case rates, even though abysmal, at least gave some predictability to recoveries, and were not much worse than the physician fee schedule rates the hospitals were receiving.

Starting in 2012, Callagy Law was at the forefront in challenging these underpayments to hospitals, and the results were extraordinary. Recoveries for hospitals in PIP went from millions per year to tens of millions and they have not slowed down since. Literally, hundreds of millions of dollars went back into the pockets of hospitals across the state by virtue of this challenge, a challenge that was eventually picked up by hospitals that were not clients of Callagy Law and other law firms that pursue PIP claims.

The bottom line today for hospital reimbursements in PIP is:

In light of the above, it is difficult to conceive of a reason why a hospital would be in any way in contract with PIP carriers for any services, not just ER services. This is especially true in light of the fact that the overwhelming majority of PIP carriers—State Farm, Geico, Progressive, Allstate—do not write healthcare policies, and so, a hospital cannot suggest that they receive financial benefits from the in-network healthcare arena in exchange for lower PIP rates.

At a bare minimum, hospitals should avoid being duped into a contractual or network rate by PIP insurance carriers. There is literally no benefit to doing so.