Material vs. Non Material Breach of Contract: What’s the Difference? 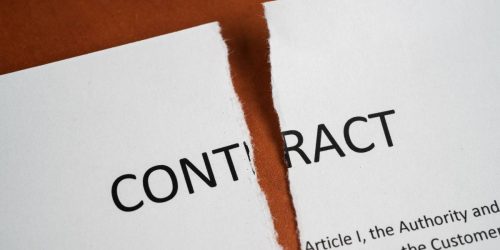 Imagine this scenario: you hire an employee who signs an agreement that states they will not seek other employment before the term of their contract is up. However, you find that they are actively looking and interviewing for positions at other companies.

Now, picture this: you have just signed a contract in which your employer states that you will work 40 hours per week for $X per year. As time goes on, they keep piling more and more responsibilities on your desk, and you cannot reasonably keep up without working 50 or 60 hours – for the same pay.

Both of these are examples of breach of contract. One party is not honoring the terms of the contract, which is a legally enforceable promise. This idea applies not only to employment contracts, but any legally binding agreement (e.g., between a homeowner and a contractor, between a construction company and a subcontractor, between a photographer and a client, etc.). When a breach occurs, the recourse available depends on whether it was a material vs. non material breach of contract. What is the difference?

The party that breached the contract can be held liable for any damages and losses incurred as a result. This may include:

The amount of damages also depends on whether the breach was non material or material.

While some contracts are simple boiler plates, others are filled with complex terms and provisions. They may run for hundreds of pages. When comparing a material vs. non material breach, a non material breach occurs when someone fails to complete a “tangential” aspect of the contract, but the core purpose of the agreement was fulfilled.

Let’s say, for example, that a homeowner has a contract with an electrician. It specifies that they use red wires for installation. Instead, the electrician used black wires. They function exactly the same and were hidden by the wall. In this case, the exact language of the contract was not fulfilled, however, the fundamental purpose – to install safe, effective wiring – was honored, and the outcome was the same.

Each case is different, so the specifics will be determined by the judge overseeing the matter, if it gets to that point.

When comparing a material vs. non material breach, a material breach of contract is considered much more serious. The fundamental purpose of the contract was not fulfilled – it defeats the purpose of even having a contract! In other words, this is not a simple mistake or a failure to adhere to every letter of the agreement. It’s a big deal.

Let’s use our homeowner and electrician as an example. The contract specifies that the electrician would install reliable, durable copper wiring. Instead, he opts for cheaper aluminum, which is far less reliable and more tricky to work on in the future. This isn’t a matter of trading apples for apples, as in the non material breach example. Instead, it directly affects the performance of the electrical system, as well as its durability and safety.

Contractual issues can be complex, and determining whether it was a non material or material breach of contract is of the utmost importance. If you are struggling with this issue, do not hesitate to contact Callagy Law for a consultation. We can help you take the next steps towards a satisfactory outcome. We have a proven track record of success in trying breach of contract cases.