What happens if you slip and fall on ice or snow? This is common during the winter and it results in a lot of injuries. Some are minor and some can be life changing. It’s a frightening experience because you don’t know if you’ll stand back up again with only some embarrassment to deal with, or if you’ll have to be taken to the hospital with a serious injury.

The most important thing to do is to make sure you’re OK. A hard impact from a fall can break bones and tear ligaments. You can cut yourself, hurt your spine, or break your hip, depending on how you fall and what you fall onto. Most falls are on slick or uneven surfaces. When you slip and fall on ice, injuries are very likely because you’re not in control of how you fall.

What you think is just a bruise could be associated with a broken bone. If you hit your head and feel fine, traumatic brain injury can take up to two days to show serious signs. If you hurt your back, it could be a spinal cord injury. Get medical attention for yourself immediately.

If you can, get the names and information of people who saw the fall. Ice forms in tons of places, and it may just be bad luck that you fell where you did. Or it could be that a business has been warned time and again to clear its ice and hasn’t listened. That means that they allowed a dangerous condition they knew could injure someone to continue.

You don’t know the story behind your fall without more information, so start gathering that information. If someone else is at fault for your fall, they may owe you for the pain and suffering that a major injury results in.

Report your slip and fall on ice or snow to the property or business owner. If they’re not available, report it to security, or any staff you can get hold of. This helps them prevent anyone else from succumbing to injury.

It also can reinforce your claim if they hold any fault. It means they know when it happens. Obviously, if you’re being loaded into an ambulance, your ability to do this is limited. Take care of yourself first. You can always ask a friend or bystander to report it on your behalf.

Ice and snow can melt. It’s important you document the conditions that caused you to fall. This is important evidence. If you claim you fell on ice and there’s no evidence ice was ever there, that’s a problem that could have easily been fixed with a quick photo.

A business will also likely shovel snow and ice up so someone else doesn’t fall. Or they may do this to prevent you having such evidence. If a leak caused the ice, or there were extra dangers involved in your fall, they may clean these up before documentation can be taken.

If you’ve suffered a major injury due to your slip and fall on ice or snow, you’re not running around the scene interviewing people, getting their contact information, finding security to report it, and taking photos. You’re lying on the ground hoping paramedics get there fast.

Family and friends don’t want to be doing this either. They want to be taking care of you.

A personal injury attorney can quickly and knowledgeably document conditions for you at any time – whether it’s right after the fall or after you’ve recovered and know the extent of your injuries. Typically, the earlier you call the more evidence can be collected. Even if the slip and fall on ice or snow happened months ago, there’s always information that untrained eyes may not find.

There may be video of the incident, an extra eyewitness, a staff member who was told to ignore the ice, or a number of other details that can be revealed.

You have legal rights in a slip and fall case. Some people choose not to exercise them because they don’t want to be rude to a property owner. Yet if that property owner knowingly left a dangerous patch of ice or snow knowing that someone could injure themselves, then they hold fault. They may owe you compensation for the injuries you’ve suffered because they could have prevented them.

When you slip and fall on ice, injuries can range from slight to fatal. You can fracture a hip, break an arm, or sustain a severe concussion. Even a sprained ankle can impact someone whose job relies on walking. A sprained wrist can cost someone who works in an office a lot of money if they can’t type. 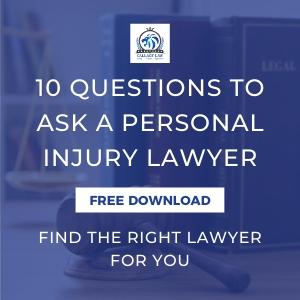 An insurance company that covers the property owner may offer you compensation up front, but this will come with a waiver that agrees you won’t take legal action against them. It’s important to know the extent of your injuries first, and to ensure a lawyer’s looked at the agreement to see if the compensation offered is fair.

Insurance companies rarely offer these waivers because they’re what you deserve. They usually offer them to limit you from suing for more later. Their goal is to avoid a lawsuit. They’re perfectly willing to spend a little money now to save themselves from paying you much more later.

You have two years after the slip and fall to start legal action in the state of New Jersey. Wait any longer, and it’s extremely unlikely you’ll be allowed to pursue remedy through the court system.

If the injury is the fault of an agency of the state government, you need to file a formal claim within 90 days. Then you have two years after that formal claim to take legal action.

Wondering if your slip and fall on ice or snow warrants filing a personal injury case? Contact Callagy Law now for a free consultation.