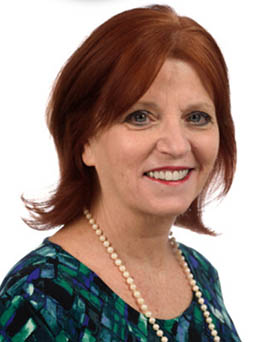 JoAnne grew up in Bay Ridge, Brooklyn, New York, and had a very interesting childhood. Her two brothers were child actors, and her family spent quite a bit of time in California while they were filming television shows. She got used to hobnobbing with celebrities.

She attended high school in Staten Island (taking a bus every day) and college in Manhattan (taking the subway every day). JoAnne also attended law school in Manhattan, but finally lived in Manhattan. After law school, she worked at large, prestigious New York law firms and practiced in a variety of areas, from general litigation to bank finance. She then practiced as in-house counsel at New York Telephone Company (now part of Verizon) with areas of responsibility from commercial attorney for new products, to contracts, to advertising.

JoAnne met her husband, Tom LaGreca (now Executive Director, Healthcare Recovery of Callagy Law) at New York Telephone Company. They got married in 1989, and after their three children came along, she pioneered working at home for the company, then known as “telecommuting.” After that period of about 3 years, she stopped practicing, and stayed home with her children. She was very involved with her children’s schools, and after about 12 years, realized it was time for her to re-enter the workplace. That’s when she met Sean Callagy, and have been with Callagy Law since the beginning of 2009.

I am interesting in that I can be very adventurous and active at times, and at other times quite the opposite!  Many people have observed that I have two speeds:  fast or stop.  Suffice it to say my speed at work is fast, meaning I apply myself with focus, dedication and energy every day.  On my personal time, I may be at Great Adventure with our grown children on Kinda Ka or going down exhilarating water slides at Mountain Creek, or I may be binge watching a new show on Netflix or reading a fun thriller.  Family is paramount, and we spend a lot of time together.

I will always remember the day I met Sean Callagy.  As noted above, I had been home about twelve years with our three children, and it was time for me to re-enter the work force.  I hadn’t practiced law in a long time, and I thought I should start slowly, perhaps a part-time position at a law firm.  Well, I interviewed with Sean’s wonderful mother, Maureen, who reviewed my resume, and told me I had to meet her son, that is, the owner of the firm.  Of course I was happy to meet my possible new employer.  I was immediately struck by Sean’s understated charisma, and when he offered me a full-time attorney position, I was thrilled.  This is in keeping what I said above, I have two speeds!  So fast back to work it would be.  That was the end of 2008, and I started in early 2009 and the journey was been wonderful! I work in PIP Litigation as an attorney, representing a wide variety of medical providers against PIP insurance carriers in arbitration.  I seek reimbursement on behalf of our providers, for unpaid or underpaid treatment to patients injured in motor vehicle accidents.

The main reason I love Callagy Law is I am 100% myself!  I don’t have a “personal JoAnne” and a “work JoAnne.”  I am just JoAnne, or Jo, or JoJo!   Callagy Law is different because our work product standards are at the highest levels, yet our work environment is relaxed.  To succeed at Callagy, you must bring your A game every day, but you can be comfortable in the execution.  It’s the perfect combination!